Maharashtrian weddings are best known for all the fun rituals and the vibrance in the aura. While some rituals might vary depending upon the beliefs of people, the simplicity and the authenticity remains intact.

The rituals begin when the horoscopes of the bride and the groom are matched. Once matched, a favourable day is decided for the wedding and other rituals.

Let us take a quick look at all these fun-filled rituals and understanding their significance.

The engagement ceremony is called “Sakhar Puda” in Marathi. The groom’s family gifts the bride a Saree and sweets to mark the auspiciousness of this day. The bride and the groom then exchange rings and are then declared ‘engaged’.

The “Kelvan” ceremony is regarded as one of the important ceremonies in a Marathi wedding. The bride and the groom, and their respective families, ask their ‘kuldevta’ (family god) to bless this happy union with prosperity and positivity. The families of both the parties invite each other for a meal together and offer gifts. This ceremony is meant to enhance the bond between two families who would soon become one.

This ceremony is like the “Haldi” ceremony in the weddings of most religions. Haldi (turmeric) paste is applied to the hands and feet of the bride and groom, and their family members. It is a ceremony filled with fun and frolic and is considered auspicious. It also gives the “soon-to-be” married couple the wedding radiance.

These rituals are carried out when the groom arrives at the wedding destination. The bride’s parents wash the feet of the groom and offer him gifts and blessings.

The bride’s father places his daughter’s hand in the groom’s hand. The groom then applies sindoor to the bride’s forehead and ties mangalsutra around her neck.

In the Satapadhi ritual, the couple gives each other seven vows and commences the new journey of life together.

When all the holy rituals are done, the bride’s father and brothers playfully twist the groom’s ear. This is to remind the groom to take good care of their daughter and sister respectively and that they invest their trust and belief in him. Families of both the parties then have a grand meal together.

The bride is bid farewell from her house as she leaves with the groom to start a new life. When the newlyweds reach the groom’s house, the bride is welcomed by the groom’s family. Here, the mother-in-law does an aarti and washes the couple’s feet with water and milk. The bride then enters the house with her right foot after softly kicking the kalash of rice (rice is considered positive).

India is a country that believes in the notion of ‘Unity is Diversity’. The Art Of Living Matrimony respects and warmly embraces the uniqueness of every religion and its peculiar traditions. Similarly, it is renowned for its Marathi matrimony. Art Of Living Matrimony, since its inception, has managed to be a platform where people connect and decide to share their lives together.

The Perfect Blend: Kannada Weddings are a Happy Mix of Simplicity & Celebrations 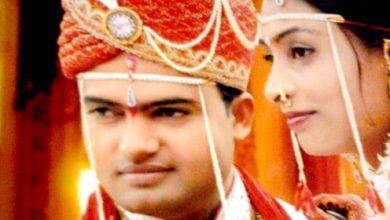 Pre-Wedding Customs in a Marathi Wedding

Moving on with Life after a separation from a loved one!