India is a land of diversity and is well-known for its age-old traditions and cultures. Each tradition is engulfed around a certain set of customs and ceremonies. What better occasions than weddings to witness the royal beauty of these diversities!

One can observe and introspect India’s heavenly capability to contain all these cultures and traditions through weddings! Amidst all the wedding cultures and soothing ceremonies, one community that stands out and has, till date, savoured its ethnicity is the “Ezhava Community” in God’s own country – Kerala.

Times have changed massively, and the world today thrives on the perks of modernization but Ezhava community has created its own sacred world through its warm and unique customs and traditions.

Let’s traverse through the constant wedding traditions that are Ezhava’s identity. Here’s all you need to remember about an Ezhava Wedding.

The commencement of an Ezhava Wedding is marked by remembering God and seeking his blessings. Fresh flowers are offered to Lord Ganesha in a decorative fashion. With his grace, both families pray to ward off evil and all the unfortunateness, wish for a whole lot of positivity and hope for auspiciousness in the lives of the newlyweds. As a crucial ritual, the Bride and the Groom are expected to be serious and keen about it. This is something that shouldn’t be ignored since the commencement of a new bond needs to be blessed to avoid any unlucky incidents.

An Ezhava matrimony has to be a grand affair. Relatives and guests should be invited in large numbers and the wedding has to be massive and magnificent. Also, the Bride and the Groom should pay great attention to the guests and should tender them. People in the Ezhava community strictly believe that the grandeur of a wedding reflects a lot and thus, this is something that shouldn’t be missed out.

In a Kerala matrimony, it is important that the Bride and the Groom, and both their families, are loaded with gifts. This ritual forms the part of the Nischayam ceremony. While this might seem a simple task, it requires planning in advance and the gifts have to match the interests of all the members involved. One has to pay close attention such that their presents have an impact on either party. It is considered unlucky and a little less humble if this ceremony is not taken seriously.

Again, this ritual is an important part of the wedding. Elders from the Bride’s and the Groom’s family pay homage to the members by offering them gifts. It is believed that no wedding can form its primary base without this ceremony. Hence, members of the Ezhava community in a Kerala Matrimony perform engagement ceremony without fail.

This is the most important ritual in a Kerala matrimony. Right after the Bride and the Groom are announced ‘Man and Wife’, they should seek blessings of elders from both the sides. It is considered lucky and should not be forsaken.

It is an unsaid rule that respect and a sense of belongingness towards the community should be an essential element in Ezhava weddings. Due to these strict customs, individuals from this community prefer partners who belong to the same community. This enhances their chances of like-mindedness while restoring the community beliefs.

The Art Of Living Matrimony holds privilege in embracing diverse cultures and traditions and in helping people meet like-minded individuals. It is a safe and healthy platform that thrives on the virtues of transparency, integrity and honesty.

Advices Parents Should Give Their Daughters Before Their Marriage 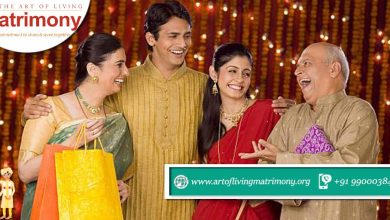 Role of Parents in Choosing Their Child’s Life Partner